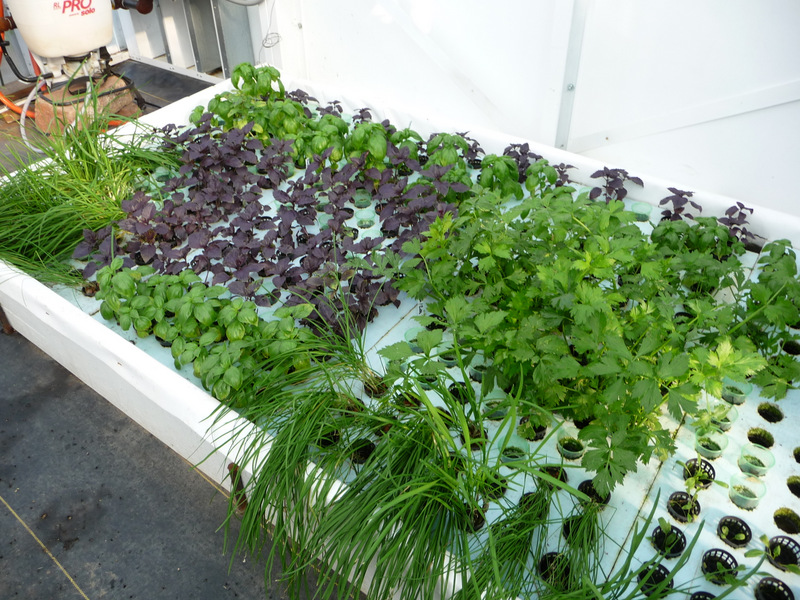 systems are still my favorite, I learned more about the possibilities of a raft system.   Malaysian prawns can be grown in the bottom of a deep culture or raft tank.  These prawns grow fast, clean detritus and algae from the roots of the plants and can be eaten.  Also growing small minnows or guppies under the rafts is also a good option.  They reproduce quickly, require little food and can be used as food for omnivores or carnivorous fish.  Raft systems also require less cost to build and less labor at all stages of production.  Starts are easier to plant in a raft, easier to remove and replant.  During harvesting all of the roots are easily removed from the tank, where as in media beds lots of roots are left in the media which can lead to clogging and anaerobic growth.  Root and soil fungi and diseases are greatly reduced by using the raft method.  Also in a raft culture the root temperature is stable which leads to faster healthy plant growth.  By insulating the raft tank heat can be retained in the system, and for plants that need a warmer climate for growth, keeping the roots warm and at a constant temperature the plants can be grown out of season.  Also in a deep culture tank an even distribution of nutrients can occur as well as more even distribution of dissolved oxygen.

What do you think? Cancel reply